Adenosine deaminase (ADA) deficiency is an inherited disorder that damages the immune system and causes severe combined immunodeficiency (SCID). People with SCID lack virtually all immune protection from bacteria, viruses, and fungi. They are prone to repeat and persistent infections that can be very serious or life-threatening. These infections are often caused by “opportunistic” organisms that ordinarily do not cause illness in people with a normal immune system.

Due to the lack of enzyme adenosine deaminase, there is an onset of ADA deficiency. This gradually results in an accumulation of deoxyadenosine, which, in turn, leads to:

Because T cells undergo proliferation and development in the thymus, affected individuals typically have a small, underdeveloped thymus. As a result, the immune system is severely compromised or completely lacking.

What are the Causes and Risk factors of ADA Deficiency?

The major cause of ADA deficiency is by mutations in the ADA gene. This gene provides instructions for producing the enzyme adenosine deaminase. This enzyme is found throughout the body but is most active in specialized white blood cells called lymphocytes. These cells protect the body against potentially harmful invaders, such as bacteria and viruses, by making immune proteins called antibodies or by directly attacking infected cells. Lymphocytes are produced in specialized lymphoid tissues including the thymus, which is a gland located behind the breastbone, and lymph nodes, which are found throughout the body. Lymphocytes in the blood and in lymphoid tissues make up the immune system.

Immature lymphocytes in the thymus are particularly vulnerable to a toxic buildup of deoxyadenosine. These cells die before they can mature to help fight infection. The number of lymphocytes in other lymphoid tissues is also greatly reduced. The loss of infection-fighting cells results in the signs and symptoms of SCID.

Symptoms usually appear in the first months of life. If your baby has this disease, he may have a lot of infections in different parts of his body, including: 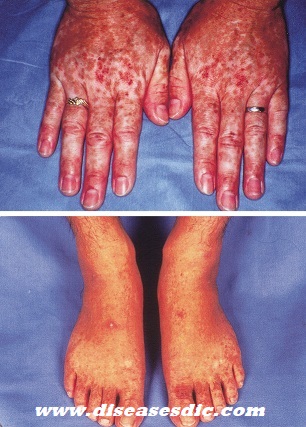 It’s common for babies to get infections. Pay special attention if your child has them often and they are:

Children with ADA-SCID often have diarrhea and widespread skin rashes. They may also grow slowly and have delayed progress in other development areas like motor and social skills.

If the disease doesn’t appear until later in childhood or adulthood, the symptoms may be mild at first. The first symptoms may be an ear or upper-respiratory infections that keep coming back.

Getting a Diagnosis and Test

There may also be clues in chest X-rays, including the absence of a thymic shadow, lung abnormalities, and signs of pneumonia, and in infants with ADA-SCID, the presence of skeletal abnormalities may aid in the diagnosis. Unusually persistent, severe, or opportunistic infections are the most common presentation, particularly viruses, fungi, or bacteria, and indicate a possible SCID diagnosis

Diagnosis of ADA-deficiency is established by biochemical and molecular genetic testing.

Biochemical testing demonstrates absent or greatly reduced ADA activity (< 1% of normal) and marked the elevation of the metabolite dATP or total dAdo nucleotides (the sum of dAMP, dADP and dATP) in erythrocytes. Reduced activity of SAH hydrolase in erythrocytes (< 5% of normal) is also characteristic. If a patient with suspected ADA- deficiency has had a recent blood transfusion, analysis of ADA activity can be measured in the parents, with reduced activity seen in heterozygous carriers, or can be performed on nonerythroid cells such as leukocytes. Fibroblasts can also be used, but fibroblast cultures are usually not readily available and this may delay diagnosis.

Treatment and Medications for ADA Deficiency

Treatment of ADA deficiency is possible through 3 main routes:

The long-term outlook (prognosis) for people with adenosine deaminase deficiency (ADA deficiency) varies depending on the severity of the condition, the timing of the diagnosis, and the response to treatment. Early screening of SCID during birth could be easy to diagnose and treat the ADA deficiency which may also reduce the duration of outcomes.

For babies diagnosed early and treated with a bone marrow transplant/stem cell transplant, the long-term outlook is generally good. At this time, it isn’t clear if these children will still develop developmental or behavioral problems later in life. Long term outlook can be seen in ADA deficiency patient if they have been treated with gene therapy. However, enzyme replacement therapy generally gives better results but it may lose effectiveness over many years.