Mitochondrial disease result from failures of the mitochondria, specialized compartments present in every cell of the body (except red blood cells). Mitochondria are responsible for creating more than 90% of the energy needed by the body to sustain life and support organ function. When they fail, less and less energy is generated within the cell. Cell injury and even cell death follow. If this process is repeated throughout the body, whole organ systems begin to fail. 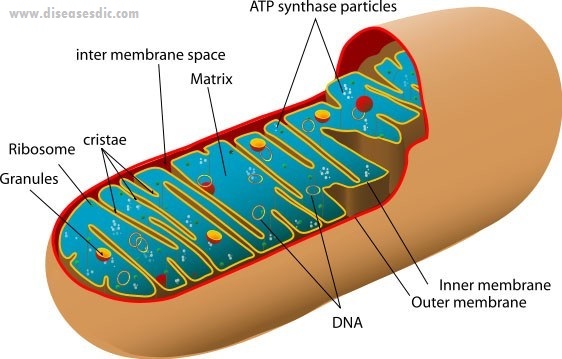 The parts of the body, such as the heart, brain, muscles, and lungs, requiring the greatest amounts of energy are the most affected.  Mitochondrial disease is difficult to diagnose because it affects each individual differently. Symptoms can include seizures, strokes, severe developmental delays, inability to walk, talk, see, and digest food combined with a host of other complications. If three or more organ systems are involved, mitochondrial disease should be suspected. Although mitochondrial disease primarily affects children, adult onset is becoming more common.

Infants, children, and adults may develop mitochondrial disorders. Experts in mitochondrial medicine describe a spectrum of disease, ranging from mild to severe. 1 in 4,000 people are estimated to have a genetically confirmed primary mitochondrial disease, yet many remain undiagnosed.

In adults, many diseases of aging have been found to have defects of mitochondrial function, including, but not limited to, diabetes, Parkinson’s disease, Huntington’s disease, atherosclerotic heart disease, stroke, Alzheimer’s disease, amyotrophic lateral sclerosis (ALS), autoimmune disorders, environmental toxicities, and cancer.

Who is at risk?

The more energy a cell needs, the more mitochondria they have. Because our brain, heart, liver, kidneys, digestive tract and muscles need the most energy, they are the most susceptible to mitochondrial disease.

Causes and it types

In most people, primary mitochondrial disease is a genetic condition that can be inherited (passed from parents to their children) in several ways.

To understand inheritance types, it’s helpful to learn more about genes and DNA. Genes are substances that give us our traits, such as brown eyes or blue eyes. Genes contain DNA, which is the “blueprint” that gives each person his or her unique makeup.

Under normal circumstances, a child inherits genes in pairs one gene from the mother and one from the father. A child with a mitochondrial disease does NOT receive a normal pair of genes from the parents. The gene has mutated – meaning it has become defective (changed). Learning the way a mitochondrial disease has been inherited helps predict the chance of passing on the disease(s) to future children.

Autosomal recessive inheritance: This child receives one mutated copy of a gene from each parent. There is a 25% chance that each child in the family will inherit a mitochondrial disease.

Autosomal dominant inheritance: This child receives one mutated copy of a gene from either parent. There is a 50% chance that each child in the family will inherit a mitochondrial disease.

Random mutations: Sometimes genes develop a mutation of their own that is not inherited from a parent. 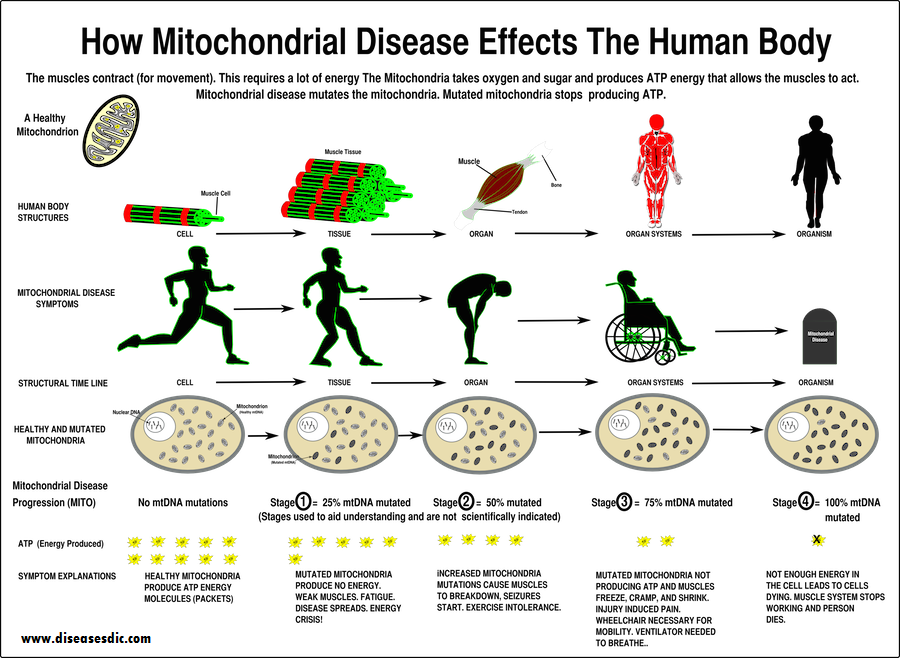 The severity of mitochondrial disease symptoms is different from person to person. The most common symptoms are:

Unfortunately, mitochondrial genetic disorders can be difficult to diagnose, and many affected people may never receive a specific diagnosis. They are often suspected in people who have a condition that effects multiple, unrelated systems of the body. In some cases, the pattern of symptoms may be suggestive of a specific mitochondrial condition. If the disease-causing gene(s) associated with the particular condition is known, the diagnosis can then be confirmed with genetic testing.

If a mitochondrial genetic disorder is suspected but the signs and symptoms do not suggest a specific diagnosis, a more extensive work-up may be required. In these cases, a physician may start by evaluating the levels of certain substances in a sample of blood or cerebrospinal fluid. Other tests that can support a diagnosis include:

There are no cures for mitochondrial diseases, but treatment can help reduce symptoms or slow the decline in health.

Treatment varies from patient to patient and depends on the specific mitochondrial disease diagnosed and its severity. However, there is no way to predict a patient’s response to treatment or predict how the disease will affect that person in the long run. No two people will respond to the same treatment in the same way, even if they have the same disease.

Treatments for the mitochondrial disease may include:

Vitamins and supplements, including Coenzyme Q10; B complex vitamins, especially thiamine (B1) and riboflavin (B2); Alpha lipoic acid; L-carnitine (Carnitor); Creatine; and L-Arginine.

Conserving energy: Don’t try to do too much in a short period of time. Pace yourself.

Other treatments: These may include speech therapy, physical therapy, respiratory therapy, and occupational therapy.

Avoid situations that can make your medical condition worse. These include: exposure to cold and/or heat; starvation; lack of sleep; stressful situations; and use of alcohol, cigarettes and monosodium glutamate (MSG, a flavor enhancer commonly added to Chinese food, canned vegetables, soups, and processed meats).