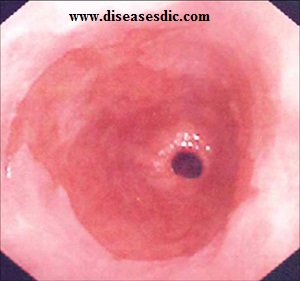 The condition is named after Australian thoracic surgeon Norman Barrett (1903–1979), who in 1950 argued that ′ulcers are found below the squamocolumnar junction represent gastric ulcers within “a pouch of stomach drawn up by scar tissue into the mediastinum” representing an example of a “congenital short esophagus”′.

In contrast, Philip Rowland Allison and Alan Johnstone argued that the condition related to the ″esophagus lined with gastric mucous membrane and not intra-thoracic stomach as Barrett mistakenly believed.″

Philip Allison, cardiothoracic surgeon and Chair of Surgery at the University of Oxford, suggested ″calling the chronic peptic ulcer crater of the esophagus a “Barrett’s ulcer″, but added this name did not imply agreement with ″Barrett’s description of an esophagus lined with gastric mucous membrane as stomach.

NDBE has the salmon-pink coloring of intestinal type mucosa, but no worrisome cellular changes. Dysplasia progresses, or gets worse, over time when genetic changes in the tissue add up.

LGD has features of mildly atypical cells (larger cells with some distortion).

HGD cells are larger and tend to appear more disorganized.  Therefore, have many worrisome features that are considered much more likely to develop into cancer.

Barrett’s Esophagus is caused by excessive exposure to stomach acid and is most commonly found in patients with ongoing GERD (gastroesophageal reflux disease).  GERD is characterized by long-term regurgitation of stomach acid into the lower esophagus.

The following are the most common symptoms of Barrett’s esophagus. However, each individual may experience symptoms differently. Symptoms may include:

Some persons with this condition may be asymptomatic. The symptoms of Barrett’s esophagus may resemble other medical conditions or problems.

Your doctor will ask you to provide your medical history. Your doctor may recommend testing if you have multiple factors that increase your chances of developing Barrett’s esophagus.

In an upper GI endoscopy, a gastroenterologist, surgeon, or other trained health care provider uses an endoscope to see inside your upper GI tract, most often while you receive light sedation. The doctor carefully feeds the endoscope down your esophagus and into your stomach and duodenum. The procedure may show changes in the lining of your esophagus.

Barrett’s esophagus can be difficult to diagnose because this condition does not affect all the tissue in your esophagus. The doctor takes biopsy samples from at least eight different areas of the lining of your esophagus.

Every three years, the physician will used an endoscope to check the lining of the esophagus to see if any abnormal tissue is present, and can remove a small sample to examine (biopsy).

This treatment destroys the pre-cancerous tissue in the lining of the esophagus that occurs with Barrett’s esophagus. During the procedure, an ablation catheter (HALO360 or HALO90 Ablation Catheter) is positioned on the abnormal esophageal tissue. Using the HALO Energy Generator, the physician delivers a rapid burst of ablative energy, which removes a very thin layer of the diseased esophagus by heating it.

If lifestyle and dietary changes do not work, medications may be prescribed. There are two categories of medicines for reflux. One decreases the level of acid in your stomach, and one increases the level of motility (movement) in the upper gastrointestinal tract.

Over-the-counter antacids are best for intermittent and relatively infrequent symptoms of reflux. When taken frequently, antacids may worsen the problem. They leave the stomach quickly, and your stomach actually increases acid production as a result.

Prokinetic agents are drugs that enhance the activity of the smooth muscle of your gastrointestinal tract. These drugs are somewhat less effective than PPIs. These may be prescribed in combination with an acid-suppressing drug.

Lifestyle changes can ease symptoms of GERD, which may underlie Barrett’s esophagus. Consider:

Researchers have not found that diet and nutrition play an important role in causing or preventing Barrett’s esophagus.​

Avoid eating or drinking the fol​lowing items that may make GER or GERD worse: