Gastroparesis means partial paralysis of the stomach. The word ‘gastro’ refers to the stomach, and the word ‘paresis’ means partial paralysis. To understand what goes wrong in gastroparesis, it is important to know how a healthy digestive tract functions. When we eat, we start by chewing and swallowing (ingesting), which requires conscious effort. Once the food reaches the esophagus, an automatic, rhythmic motion (peristalsis) takes over, propelling the contents all the way through the digestive tract. Typically, the passage of food from one area of the digestive tract to the next is precisely coordinated, so that food stays in each area just the right amount of time. For the stomach, this is approximately two hours. 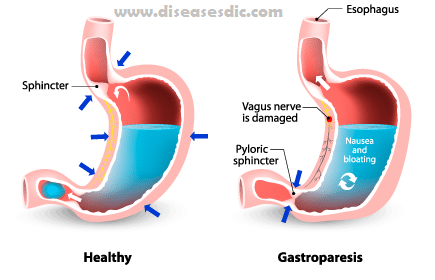 However, in those with gastroparesis, the food does not move from the stomach into the intestine as quickly as it should (delayed gastric emptying). Gastroparesis is a motility disorder, which means there is no physical obstruction preventing timely digestion, but rather a difficulty regulating the muscular activity. It occurs when the pair of nerves that connects the brainstem to the gastrointestinal tract (vagus nerve) is damaged or not functioning properly. Since the vagus nerve is unable to send the necessary messages to ensure that the muscles in the stomach continue to work normally, food remains in the stomach for too long, leading to symptoms.

In some cases, gastroparesis may be categorized as one of the following:

Idiopathic gastroparesis: There is no detectable abnormality responsible for the symptoms experienced, although sometimes the symptoms began following an infectious episode (gastroenteritis with vomiting, nausea, and diarrhea)- postinfectious gastroparesis

Diabetic gastroparesis: Diabetes mellitus is the most common disease associated with gastroparesis, with 20-50% of longstanding diabetics experiencing gastroparesis, mostly in association with other complications of diabetes.

Factors that can increase your risk of gastroparesis:

The most common cause of gastroparesis is diabetes. People with diabetes have high blood glucose, also called blood sugar, which in turn causes chemical changes in nerves and damages the blood vessels that carry oxygen and nutrients to the nerves. Over time, high blood glucose can damage the vagus nerve.

Some other causes of gastroparesis are

Many people have what is called idiopathic gastroparesis, meaning the cause is unknown and cannot be found even after medical tests.

Symptoms of gastroparesis mirror some symptoms of delayed gastric emptying and include:

These symptoms, however, are non-specific and do not distinguish gastroparesis from a mechanical, infectious or non-infectious inflammatory or biochemical disorder that also causes delayed gastric emptying.

To make diagnosing GI disorders even more challenging, these same symptoms may also occur in patients with normal gastric emptying, the degree of delay in gastric emptying does not predict symptom severity, and correlation between symptom reductions and improved emptying cannot be always demonstrated.

Gastroparesis can cause several problems:

Your healthcare provider will give you a physical exam and ask about your past health. He or she may also use other tests, including:

Blood tests: These tests check your blood counts and measure your chemical and electrolyte (mineral) levels.

Upper GI (Gastrointestinal) series: This is also called a barium swallow. This test checks the organs of the top part of your digestive system. These are your food pipe (esophagus), your stomach, and the first part of your small intestine (duodenum). You will swallow a metallic fluid called barium. Barium coats the organs so that they can be seen on an X-ray. X-rays are then taken to check your digestive organs.

Radioisotope gastric-emptying scan: During this test, you will eat food containing a mildly radioactive substance, or radioisotope, that will show up on a scan. The amount of radiation is very small. It is not harmful. But it lets the radiologist see the food in your stomach during the scan. He or she can also see how quickly food leaves your stomach. This test can take as long as 4 hours. Upper endoscopy: This is also called esophagogastroduodenoscopy (EGD). This test looks at the lining or inside of your esophagus, stomach, and duodenum. This test uses a thin, lighted tube, called an endoscope. The tube has a camera at one end. The tube is put into your mouth and throat. Then it goes into your esophagus, stomach, and duodenum. Your healthcare provider can see the inside of these organs. He or she can also take a small tissue sample (biopsy) if needed.

Wireless capsule study: This test involves swallowing a wireless capsule that measures stomach emptying and how fast food and fluids move through your intestine. You will pass the capsule out of your body with a bowel movement. 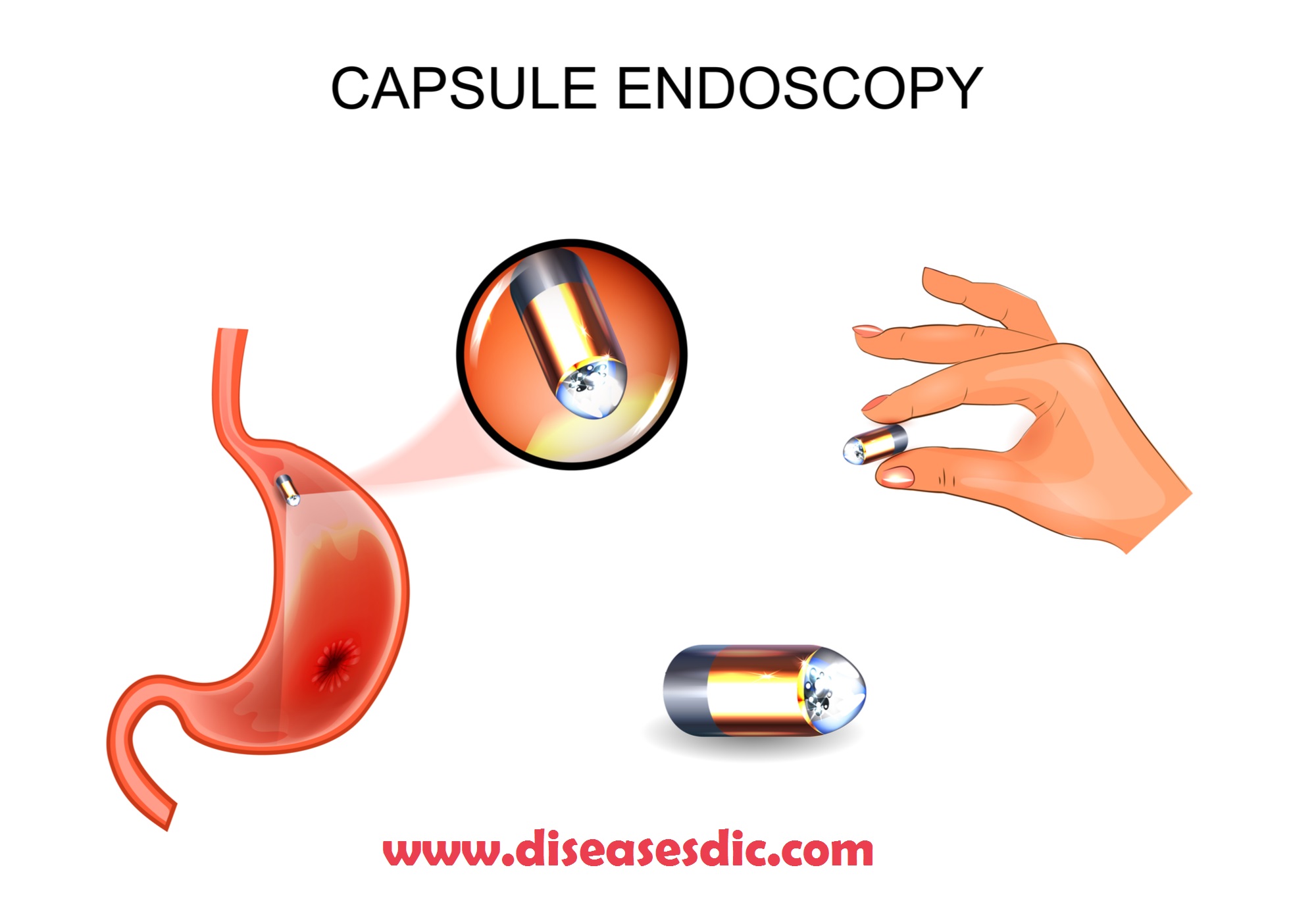 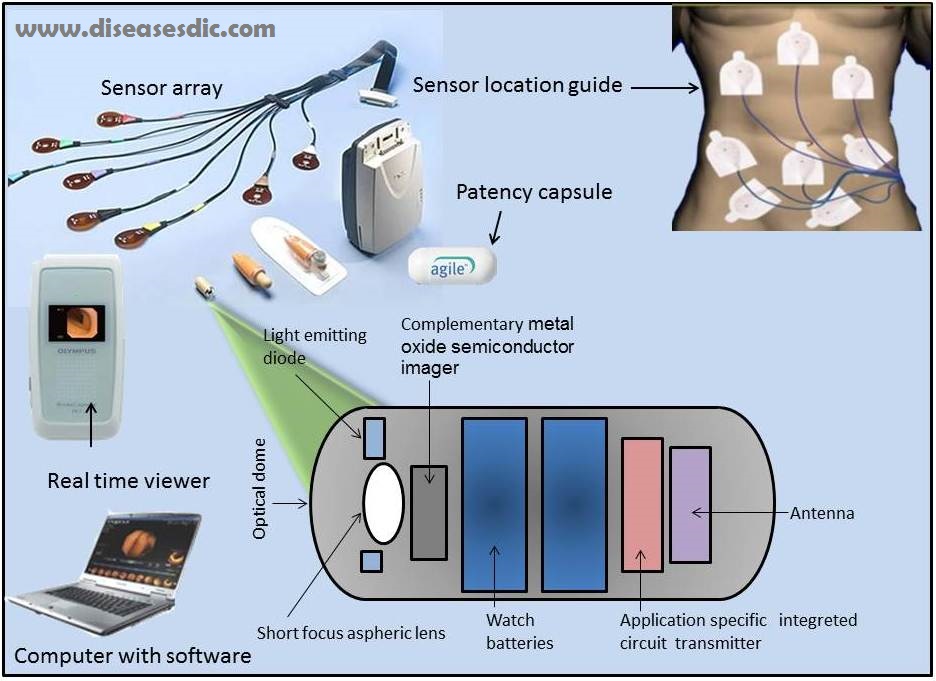 Gastric emptying breath test (GEBT): This test checks stomach emptying by measuring how much carbon dioxide you breathe out over several hours after eating food.

Scintigraphic gastric accommodation: This test measures your stomach contents before and after a meal. It also checks how well your stomach relaxes after you eat food.

The goal for treatment of gastroparesis is to decrease symptoms like nausea or bloating. There is no cure for gastroparesis, and most people require a combination of treatments. Eating frequent, small meals that are low in fat and fiber can help minimize symptoms. Liquid calories, such as those in milkshakes, are usually well-tolerated.

This is the primary reason that, despite having a nonfunctional GI tract, there are patients with gastroparesis who are overweight or have gained significant weight even as their nausea, vomiting or bloating have worsened. There are a variety of medications available to manage nausea and promote stomach contraction. Pain medications like opioids are not recommended, as they slow stomach emptying.

When dietary changes and medications fail to control symptoms of gastroparesis, then surgical treatment is considered. There are a variety of procedures available, and their use is tailored to each individual depending on their symptoms. These procedures are detailed below.

Pyloroplasty: This procedure permanently opens the valve at the bottom of the stomach, allowing contents to pass more easily into the small intestine. This procedure is done minimally invasively.

Gastric nerve stimulator: This device implants electrodes into the wall of the stomach that act to increase the stomach’s motility. The electrodes are connected to a transducer in the abdominal wall that carries impulses to the stomach. This device can be accessed transcutaneously (across the skin without use of needles) to monitor strength of contractions and for device maintenance. Impulse contractions can be set to optimize control of nausea, vomiting, bloating and other symptoms related to gastroparesis.

Gastrostomy tube: This plastic tube, also known as a G tube, enters the stomach from the abdominal wall. This allows the patient’s stomach to vent and drain air and fluid that would normally cause bloating, nausea and distension of the abdomen. This can be helpful as a part of another procedure or on its own.

Jejunostomy tube: This plastic tube enters the intestine through the abdominal wall. This allows nutritional supplements to bypass the stomach and can provide nutritional support when the diseased stomach is not able to move enough food through to meet nutritional needs.

Gastrectomy: Removal of the stomach is an operation of last resort. During this operation, a surgeon removes the diseased stomach, which allows food to go directly from the esophagus into the small intestine. Surprisingly, even complete removal of the stomach does not eliminate nausea and symptoms from gastroparesis in all individuals.

Your doctor may prescribe one or more of the following medicines:

Metoclopramide: This medicine increases the tightening, or contraction, of the muscles in the wall of your stomach and may improve gastric emptying. Metoclopramide may also help relieve nausea and vomiting.

Domperidone: This medicine also increases the contraction of the muscles in the wall of your stomach and may improve gastric emptying. However, this medicine is available for use only under a special program administered by the U.S. Food and Drug Administration.

Antidepressants: Certain antidepressants, such as mirtazapine, may help relieve nausea and vomiting. These medicines may not improve gastric emptying.

Seek appropriate care and take an active role in your health. Working along with your doctor or health care team will help control, reduce, or prevent symptoms and complications.